Before I begin, some context:
Naw-Rúz (literally, new day) is the first day of the Bahá’í calendar year and one of nine holy days for adherents of the Bahá’í Faith. It occurs on the vernal equinox, on or near March 21. Historically and in contemporary times, Naw-Ruz is also the celebration of the traditional Iranian New Year holiday and is celebrated throughout the countries of the Middle East and Central Asia such as in Iran, Azerbaijan, Turkey, Iraq, Armenia, Georgia, Russia, Afghanistan, Syria, and Tajikistan. Thanks Wikipedia.

This morning, I was surprised by my dear dear Israeli friend, Lifa and his gorgeous wife and sweet son with an absolutely mouthwatering plate of baklava! Posted by Lifa’s mother all the way from Haifa, especially for moi! Amazing. Here in rural Japan, is an Israeli, the nationality I was taught to hate (from the mere age of 7!) by my Iranian school and teachers, surprising me on a Bahá’í and Iranian holiday. Wishing me a joyful New Year. Making sure I am okay, happy and well so far from my family and friends. Love is everything. “So powerful is the light of unity that it can illuminate the whole earth.”

I am so utterly grateful. I will forever remember this day. 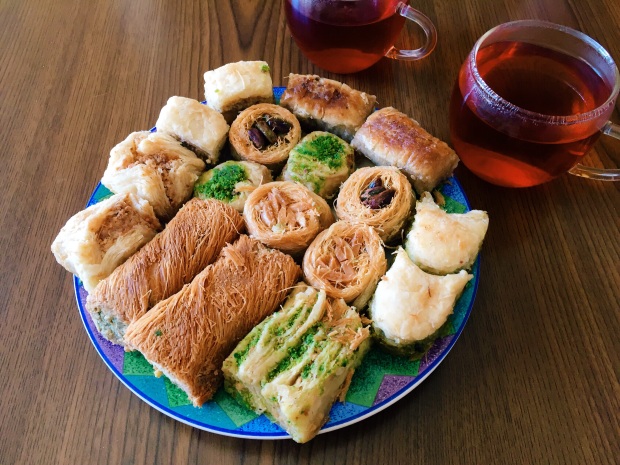 As some of you may or may not know, I started this blog before coming to Japan. Iaccidentlyatethewholething was born in NZ. And in specific, Quake City AKA Christchurch which happens to be where the majority of you lovely followers reside. And so even though I’ve been eating my way through Asia, you and Christchurch have always been on my mind.

Excuse me while I hum tiki taane for a while.

Okay, done. As I was saying, you’ve been on my mind and I’ve been wishing that you too, could try all this delicious Japanesey stuff. Which is why I’ve asked my super hot friend Melissa Lin to guest post on here once in a while. Today ladies and gents is MEL EATS’ REVIEW ONE. Sorry Mel I just named you, is that okay?

For now, Anisa says bye! (I kinda like talking about myself in third person, I feel like that’s how J Derulo feels when he says his name in his songs)

Good news, foodies! You don’t have to teach English in Okayama to eat choux creme or cakes and pastries flavored matcha! What? When? How? Allow me to go on… tucked in the Church Corner Arcade (Upper Riccarton) is a little gem by the name of Patisserie Yahagi. The store is known for their delicious Japanese (and French) inspired cakes and pastries. They’re the first Japanese patisserie to open in New Zealand and one of my most favorite dessert vendors in Christchurch.

Walking into Patisserie Yahagi, first you are acknowledged and greeted by their warm and friendly staff. Next, you are mesmerised by their flawless creations delicately sitting on display. With so many delectable and award-winning goodies just demanding to be eaten, I have definitely had my fair share of pastries and cakes from this place. And although I am forever on an ongoing quest to taste all of their heavenly desserts, so far, one of my favorite pastries from Yahagi are their Japanese choux cremes (basically, giant cream puffs). Hands down, they are one of the best I’ve ever had! The choux pastry is airy and perfectly firm, it holds its shape and doesn’t go soggy when filled. Whatsmore, exquisite Tahitian vanilla bean crème is piped fresh into the pastry when ordered, creating morsels of deliciousness.

Patisserie Yahagi is definitely a place worth the visit. Their desserts aren’t too rich and have just the right amount of sweetness, making them irresistible treats for everyone. Though I’ll warn you now, it’s very tough, some would even say, impossible leaving the store empty handed.

Thanks for having me!
MEL

THIS THIS THIS is happening again.

I dedicate this re-post to my one and only sister, Delaram who has repeatedly shared, liked and commented on every single one of my blog-posts both online and in person. Deli, I appreciate every one of your efforts If I ever “make it” you’ll be the one person I won’t forget harharhar

Delaram loves carrot cake which is why I attempted these truffles in the first place and you know what else? She’s coming all the way to Japan to see me in THREE days. We have a FULL (and fun) schedule so watch this space!

The recipe for my “Mind-Blowing Carrot Cake Truffles” is my most viewed post yet: 24,907 and counting. I know, it isn’t that much compared to all the famous food bloggers out there but for me, it’s insane. Especially when the views come from St. Lucia, Zambia, Ecuador,  Qatar, Morocco, Cameroon, Benin, Luxembourg and Poland! WOW.

Blogging, at least for me, takes a lot of perseverance and faith. It’s laborious putting your energy and time into something without knowing what, if any, results will come of your actions. I haven’t started making a living off of my blog/writing yet, but for now, I’m over-the-moon knowing you’re eating these instead of cake.

Don’t allow the alluring charm of these cakes to fool you. I am not happy baking in the kitchen, I am in bed with a centipede bite. But, I am also surrounded by much love and support and I’m typing on a macbook etc etc so I’m not completely hopeless. Things could always be worse. I could have been bitten by a snake or a bear – not unlikely in my neck of the woods. Anyways, my condition shall deprive me of baking (in this case: not baking) for some time. So, since I’ve been lucky enough to gain a 100 or so new followers as of recently (yep, I’m bragging), I’d like to take this time to re-introduce my healthy, raw, vegan AND idiot-proof cheesecakes.
They’re absolutely delicious and super easy to make. Recipe: here. 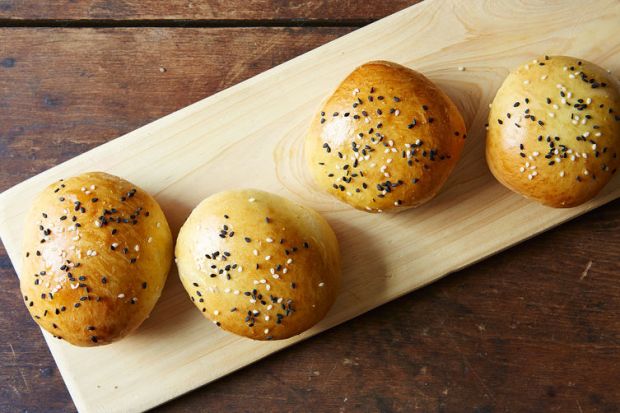 Dear red bean bun,
my only want
is to face-plant
into your spongy tum
as hard as an exhausted
workman smacks into
his pillow
at the close
of a hard day’s
night.

I love coffee dates. Unfortunately though, I have an insanely large sweet tooth so going out for coffee means intensely craving a sugary something to go along with my drink. Unfortunately again, most cafes don’t provide sweet options that are even slightly healthy. “But Anisa, there is no such thing as a sweet that’s healthy” I hear you say? Wrong! These little cookies are so sweet, so delicious and SO good for you. They’re also naturally free from refined sugar, gluten and dairy! Plus, they’re the perfect size to stick in your purse/man-bag/jean pocket (preferably front pocket than back – so you don’t accidently sit on them of course, but then again, a front pocket could also be problematic…). Anywho, I don’t care if you’re not supposed to bring your own food into a cafe etc etc- these cookies are sho shmall; no one will see!

PS this recipe is quite adaptable so feel free to substitute the oranges for lemons (if that’s your kind of thing) and the peanut butter can be substituted for almond butter if that’s all you’ve got in your pantry.

In a food processor, blend all of the ingredients together until a dough-like mixture is formed.

Using your hands form little balls and place them 1cm apart onto a lined oven tray.

Using a fork, gently flatten down each cookie then sprinkle with sesame seeds.

Place in the oven and bake for 8-10 minutes or until golden on the outside.

Enjoy with a cup of your favourite hot beve!