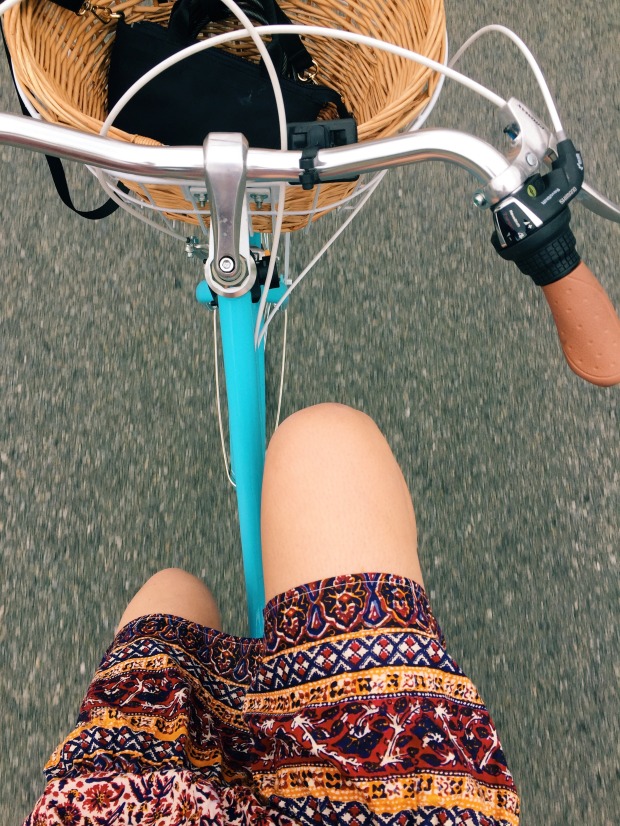 Look auntie Pouneh(France), Dave and Maria(Spain) who love bicycles! This is my new ride for the summer. 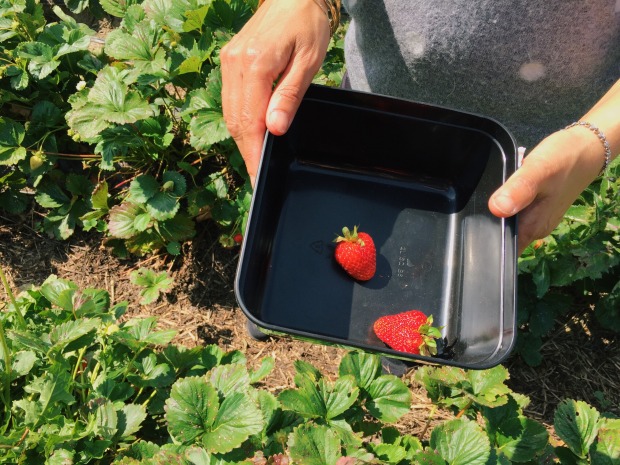 That’s how you know you love someone, I guess, when you can’t experience anything without wishing the other person were there to see it, too. (Kaui Hart Hemmings)

Much needed coconut water after a 9km ride after an 8 hour shift on a 30 degree day. 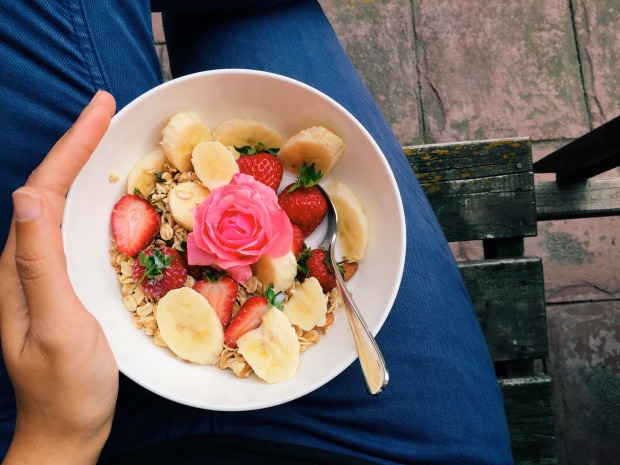 These last two are for baby Mia: Lifa and Aki’s beautiful newborn. My heart is overjoyed for you (especially OZ-kun).

The reason I write is to share my truth. It’s sort of like the philosophy for my blogging, if you will. So I will be honest with you. As I have been and I hope you know I have been through and through. Okay, here goes: leaving NZ a second time was one of the hardest things I have ever done. Period. I didn’t want to leave. NZ is so beautiful and my city, Christchurch is so nice. I wanted to stay in a place with family and friends, where I can drink the tap water and read the restaurant menus. Alas, I am back. Here by my own will (no one forced me). My main intention being that of growth. Growth as a person and as a writer. The former, I am certain has happened, for I am now Wonder Woman. I do everything here when I don’t speak the language. And I see snakes, many snakes everyday. As for the latter.. well, only time will tell. I watched a movie on the plane called 5 to 7 about a French woman having an affair and well, disregarding that, one of the character’s was an ambitious writer who SPOILER ALERT after countless unsuccessful attempts finally had something published for The New Yorker and then something else and something else and again and again…and yeah, I really hope that happens for me too, one day. 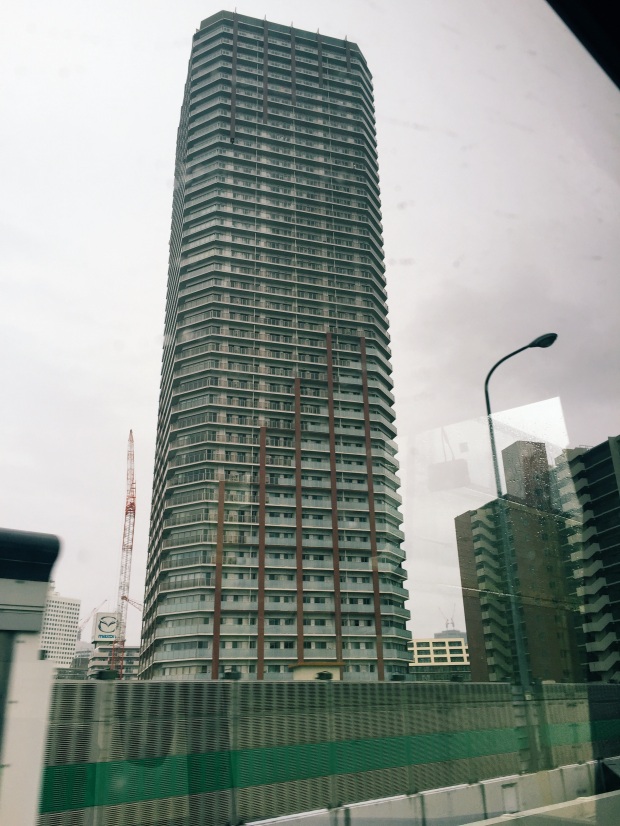 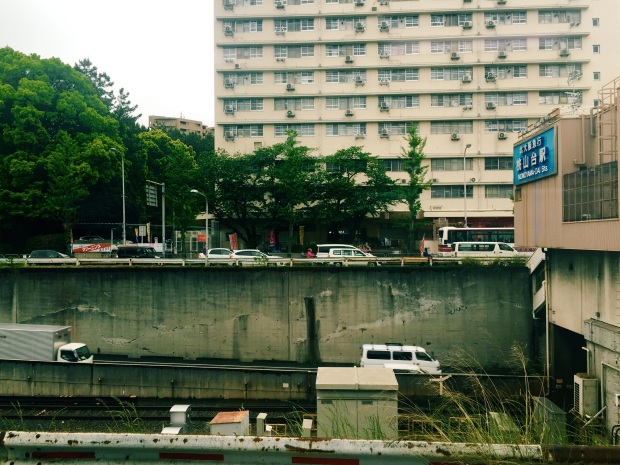 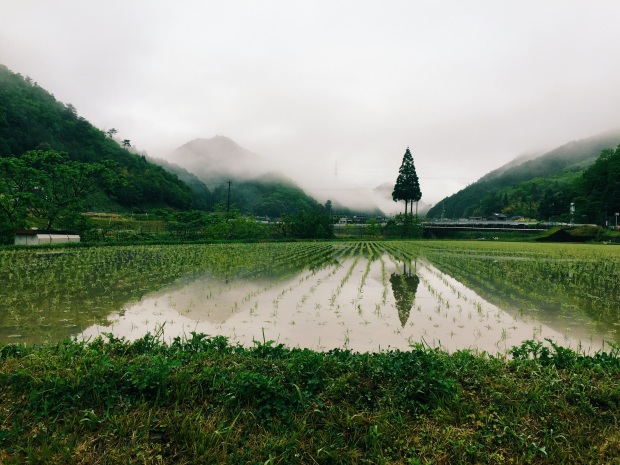 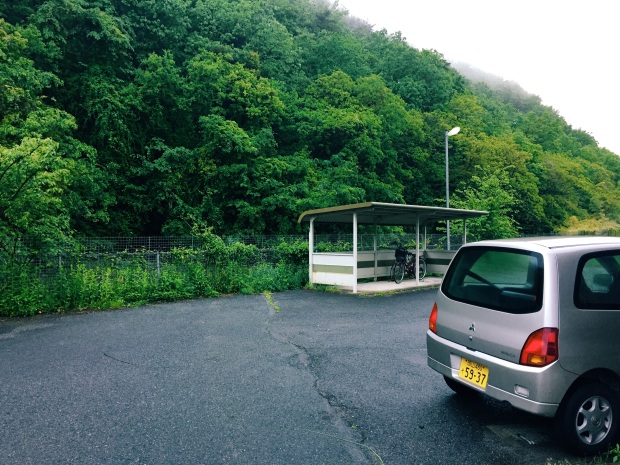 Being a food blogger is easy: you just eat food and photograph it.

From top to bottom: my goods in my kitchen, power slaw using soft-dried blackcurrants in place of raisins, an incredible spread of home-made bread, fresh fruit (sweet lemon, strawberries and blood orange), onigiri and a simple sweet potato and black sesame seed medley, homemade green tea, the organic plate from nonocafe and last but not least, their yellow kiwi-fruit cheesecake. 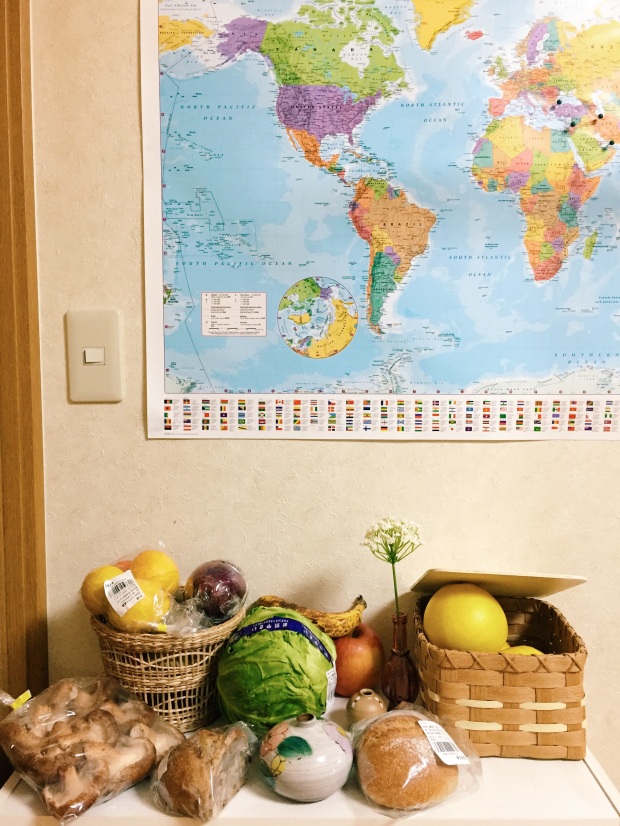 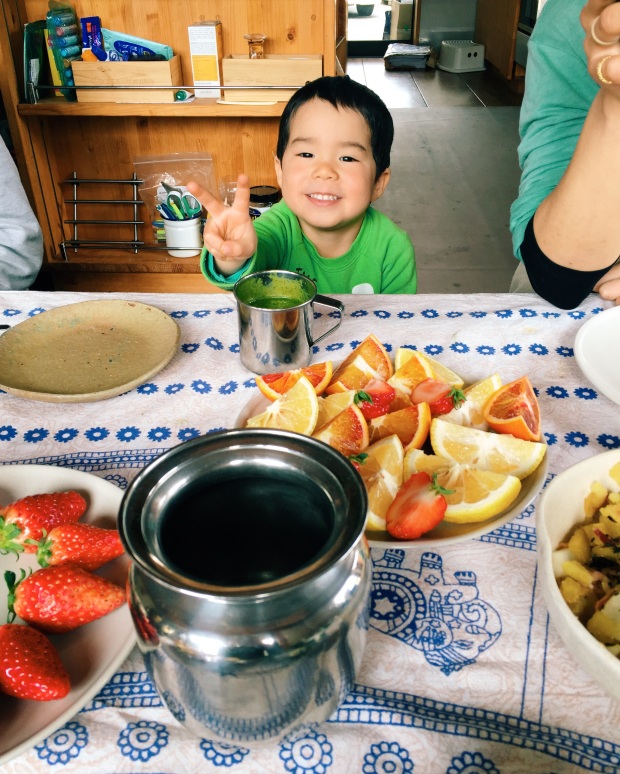 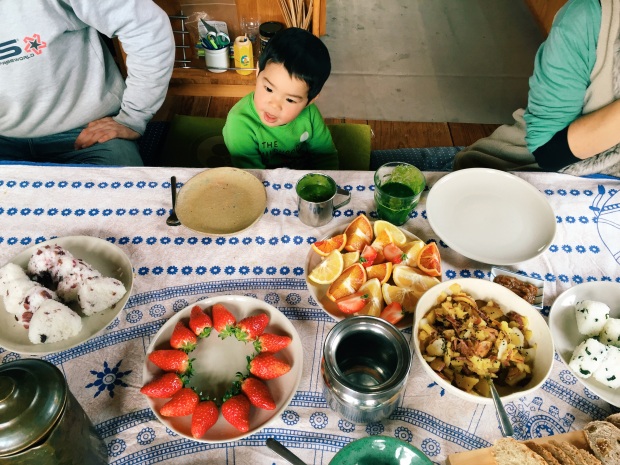 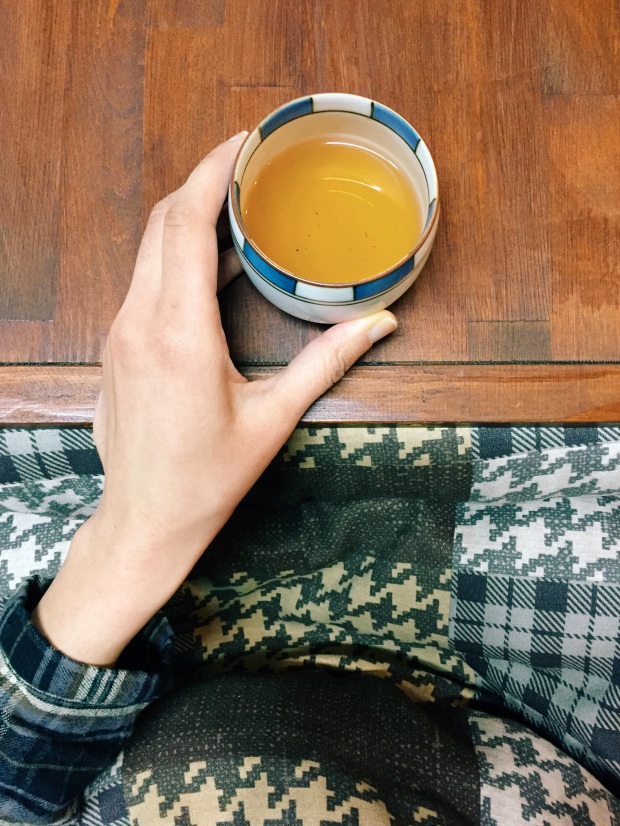 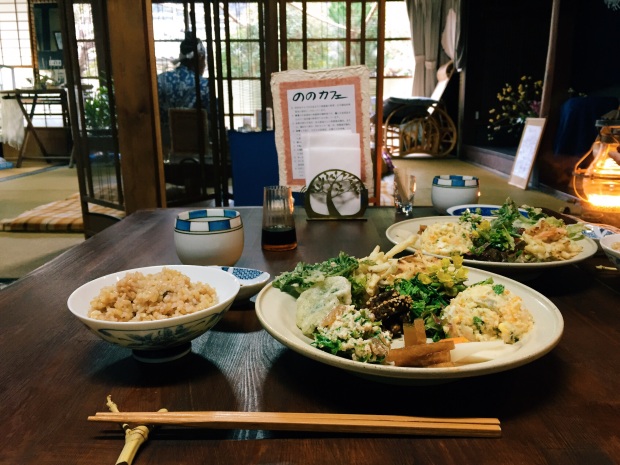 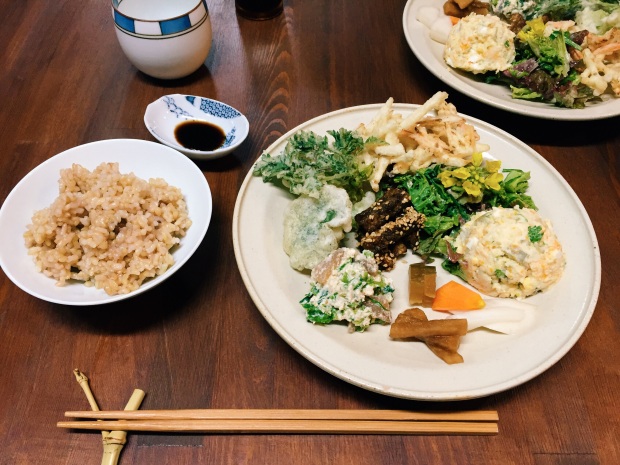 On another note, Japan is still bloody cold, my parents arrive in exactly 2 weeks, 13 days, not including today (not that I’m counting) and I realized recently that my blog, much like my life, is rather jumbled and lacking one major goal (sigh). Though even so, for some reason, y’all still follow… So, arigato, arigato and chuuu xx

According to a survey conducted in March this year, 1.98 million “foreigners” reside in Japan today. And though this may seem a significant number, when put as a mere 1.54% of the entire population, it really isn’t. If your numerical skills are as bad as mine, let me tell you that 1.54% “foreigners”, means 98.46% natives. In other words, everyone is Japanese but YOU. This makes things a little difficult. Especially coming from a somewhat multicultural country as NZ. Why does it matter? Well, theoretically it shouldn’t but we’re flawed humans and sometimes, we just cant help but to feel like a complete outsider (with four legs).

I can’t speak for the urban dwellers but for me, being a “foreigner” in my rural Japanese village has proposed some discomforts. For one, people stare (sometimes with mouths wide open). This is because, I look different; my skin is darker, my nose is longer and my butt bigger. Next, my mannerisms are unlike theirs. For example, I often eat nuts, brown bread and things vegetarian. The latter, a term almost non-existent in my village. In addition, I don’t peel my grapes, I hardly ever use an umbrella (both in sunshine and rain), I like getting a sun tan and I go home right on the dot when my work is finished. All of which sometimes lead to racism.

Don’t get me wrong, this happens everywhere. Even in New Zealand, a moreorless “multicultural” nation, my family and I were/still-are subject to racism. I was constantly attributed offensive “bomb” and “terrorist” references. Even worse off, was my father. A walking stereotype; middle-eastern taxi driver with black facial hair. But, if I looked past the ignorant idiot making said reference, I’d see an Indian, a Chinese and/or a Samoan all dwelling in one place and in turn, I’d feel a little less isolated. They’re in the same boat as me, I’d reason. This was my personal tactic. But in this very rural very Japanese village, that tactic is ineffective since looking outside (at others) for solace is out of the question (seeing as everyone I encounter is a native). Which brings me to my recent revelation that I shouldn’t be seeking solace like that in the first place.

If I interpret the unfriendly stares of my neighbours or a certain colleague’s mean comments when I eat the likes of raw capsicum as treatment I am only receiving because of my “foreignness”, then I myself am actively contributing to the problem. For what am I to make of the endless love and generosity showered upon me by members of the same race? In her novel Change of Heart, Jodi Picoult says: “When you’re different, sometimes you don’t see the millions of people who accept you for what you are. All you notice is the person who doesn’t.” This is a profound statement. It suggests equality/fitting in is in fact, a conscious decision. However, I want to take Picoult’s idea a step further. Apart from our physicality and man-made nationalities, are we actually different? My new realisation is this: we need to stop seeing ourselves as different from one another. When we obliterate the idea of difference, of “foreignness” and instead accept that we are all in Bahá’u’lláh words, “the fruits of one tree, and the leaves of one branch” then, no matter how alien we are in our appearance and in our behaviour, we see a little (or a lottle) part of ourself in one another and so become less sensitive to prejudice.

Today, my gorgeous colleagues made sushi (the western way) in my honour. You see, Japanese sushi is unlike “sushi” elsewhere. In Japan, Sushi refers to a piece of raw fish on a bed of rice with wasabi on it. Sushi in New Zealand, means sushi-roll doesn’t it? Filled with chicken, prawn, salmon, avocado, cucumber, lettuce etc. Nowadays, brown rice, black rice and quinoa sushi have also entered the market. To the Japanese, such sushi is not sushi in any sense. “Teriyaki sushi? What the…” Nevertheless, for my sake, my colleagues made an exception. If you look closely at the photographs you will see a bowl of brown rice and a small pot of soup without wet seaweed (wakame) which I strongly detest, especially prepared for Anisa-sensei.

I am so utterly grateful. There is a lot of prejudice in the world today but lest we forget/fail to see, this world is also home to much selfless generosity and compassion. In the profound words of Baha’u’llah, “The earth is but one country, and mankind its citizens.” 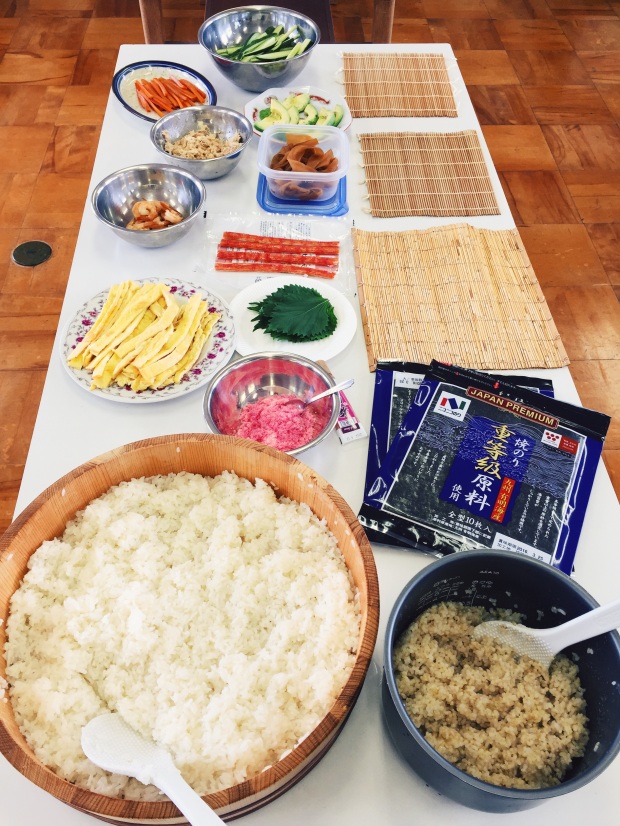 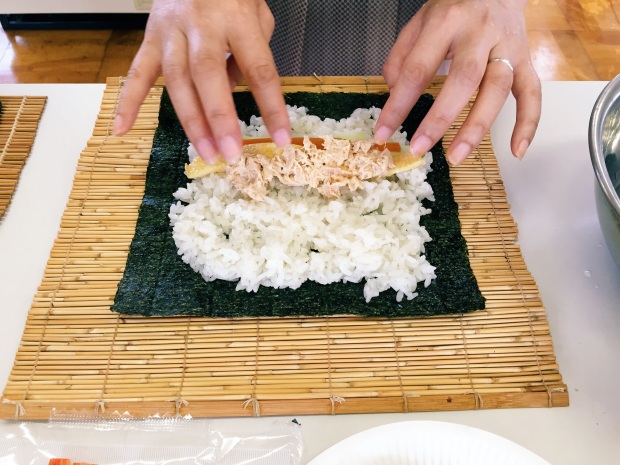 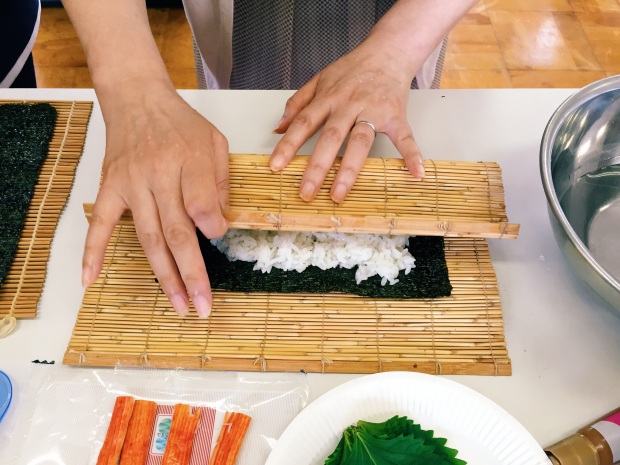 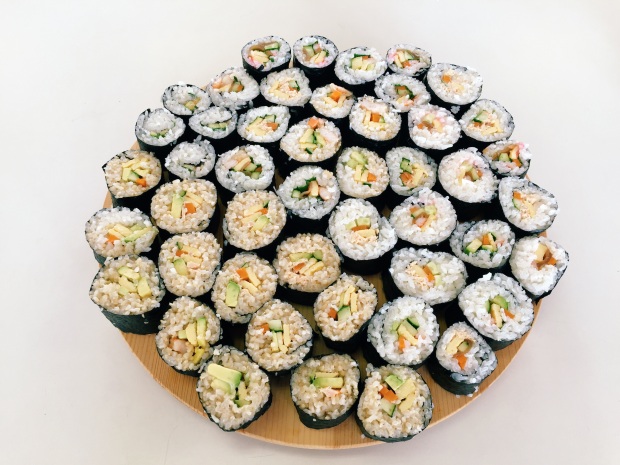 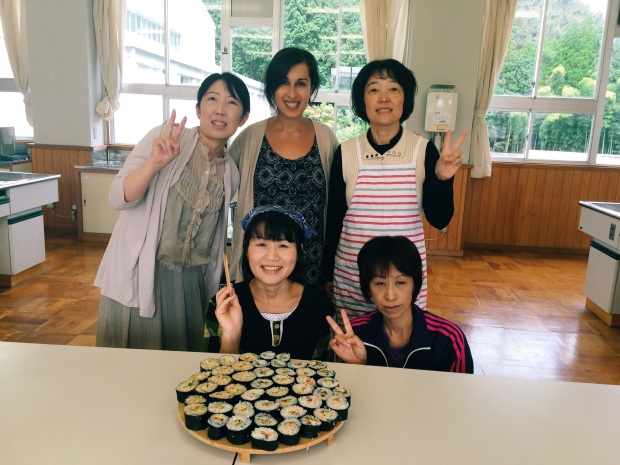 Do you know how hard peeling grapes is? Borderline impossible.

So, as you can imagine, things didn’t go down too well when I told my Japanese friends I can eat an entire apple, stalk and all. Tehehe I accidently….

Okay, but in their defense, most Japanese fruit are gigantic. For example, the apples are the size of my dad’s head and their grapes the size of golf balls. And, I hear they have massive pears, too (I’m holding out for those). Oh, and since this post is all over the place and I’ve already gone on a tangent, let me quickly just say, I’ve literally been spotting hundreds of premature figs, persimmons and kiwi-fruits everywhere – the anticipation is killing me!

Anyways, since I don’t have any relevant fruity snaps for this post, please visually feast on the following photographs of my recent dinner parties, instead:

PS: if you’d like the recipe for anything just ask meeee

Puzzled in Shopping Town,
surrounded by aisles
of unidentifiable items
marked with squiggles,
serves as motivation
to make it past ‘konnichiwa’
if wanting to eat “outside the box”.
Also literally,
beyond instant noodles.