During my time here, Yuko and Papa have done SO much for me and my family. Over and over again, they have shown us, once strangers, now family, unconditional love. Last weekend, I had the pleasure of spending the day with them and my oh my was it a day. Finally today, on this very rainy morning (as it is now rainy season – ahhhh) I have the chance to sit down and tell you about it.

So, first up, Japanese soba (super healthy buckwheat noodles) at THIS PLACE. Next, fresh mochi (Japanese rice cake) with kinako (roasted soy bean flour) at the highway rest area made by the world’s second cutest chef (the first cutest is my sushi chef friend of Yoshinoya). Last, Hiruzen HerBill Garden. This place was SO beautiful. Like, I can’t say enough. Embarrassingly, all I could think about while there was how nice it would be to get married there! So pretty. So many flowers! I love flowers (if you can’t tell). After exploring the garden, we drank herb tea in their cafe. Apricot and peach something. Delicious. For more info click HERE. 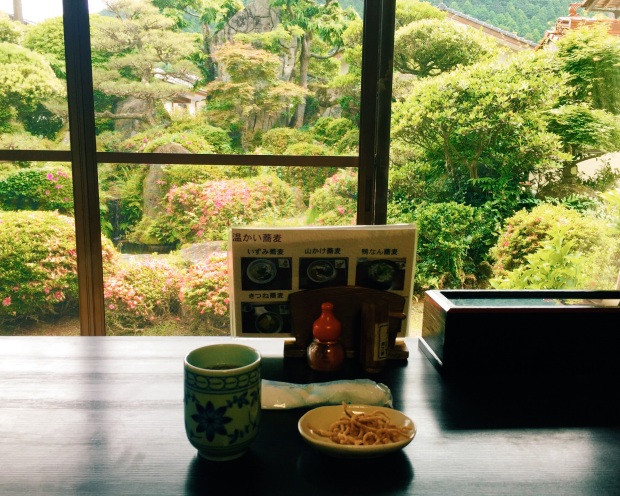 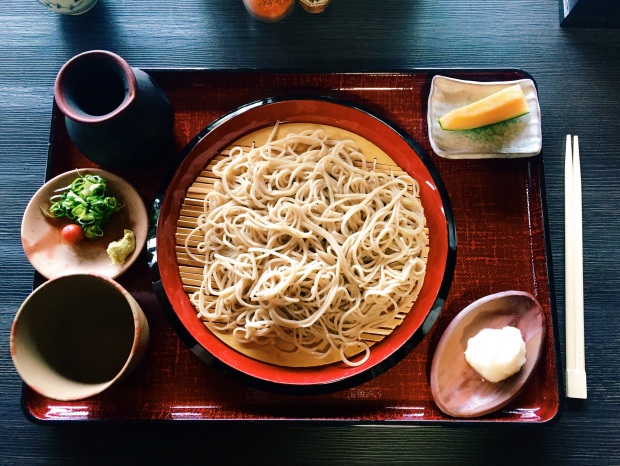 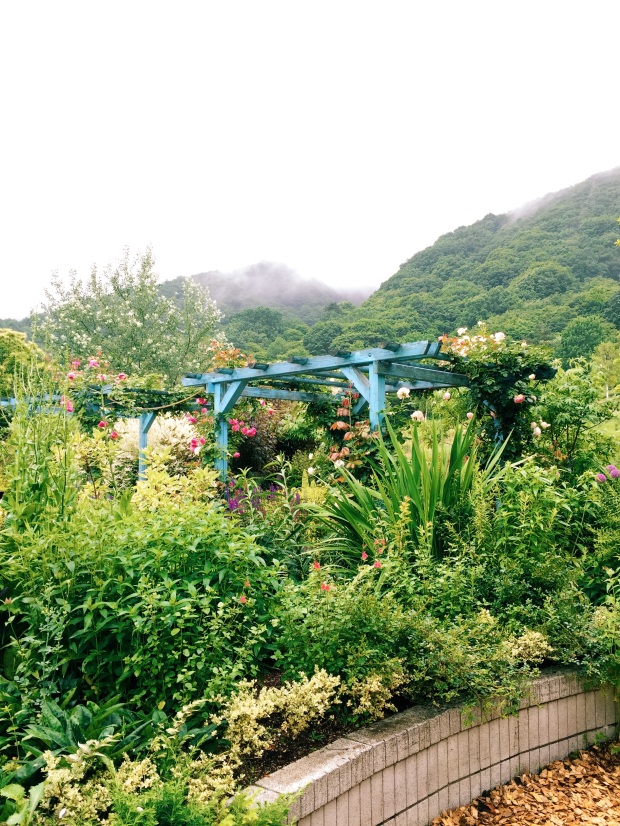 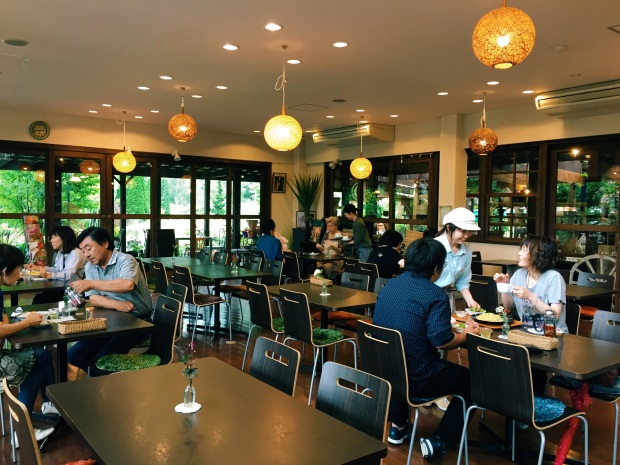 For my little sister, Juri’s birthday, my Japanese parents took us to Okayama Table Terra. And oh my goodness. This place was SO delicious. I could not believe it! I wish I had discovered it earlier.

We had the chef’s choice set menu and it was to die for! WOW! I can’t wait to go back. Is the chef single?! Can I marry him? More details HERE.

Because I can’t fluently understand Japanese, I can’t give you the exact description of each dish, but what I can say is we started with an antipasti plate (featuring zucchini bruschetta), followed by a variety of vegetables served with an anchovy dip, then cold new season cream of potato soup, next delicious eggplant pizzas topped with cheese and mince, next pizza margarita and last but definitely not least (because it was our favorite), a vegetarian zucchini and soy-bean “bolognese”. WOW it was so delicious I wish I could eat it for lunch today. Heck, also dinner.

At Terra, we also had coffee and a little cake. At home, we had tea and a big cake (gluten, dairy and refined-sugar free) – which I made. Recipe HERE. Except for Juri, I doubled this recipe: made two cakes, placed them on top of one another and spread an all-natural raspberry jam in the middle of them. Mama Mia. 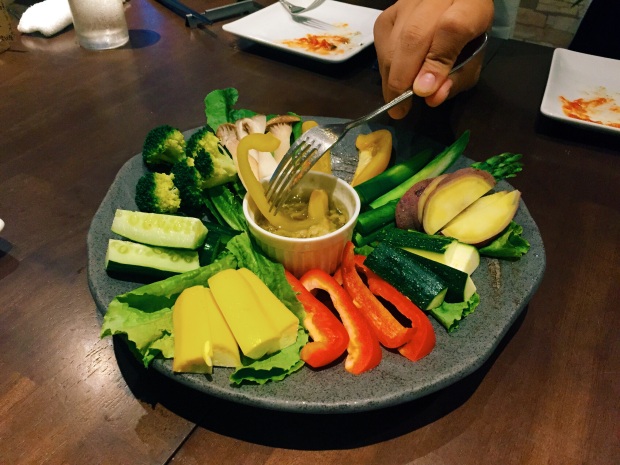 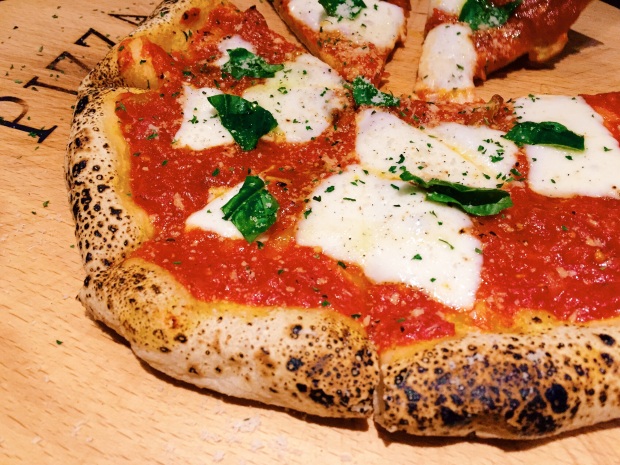 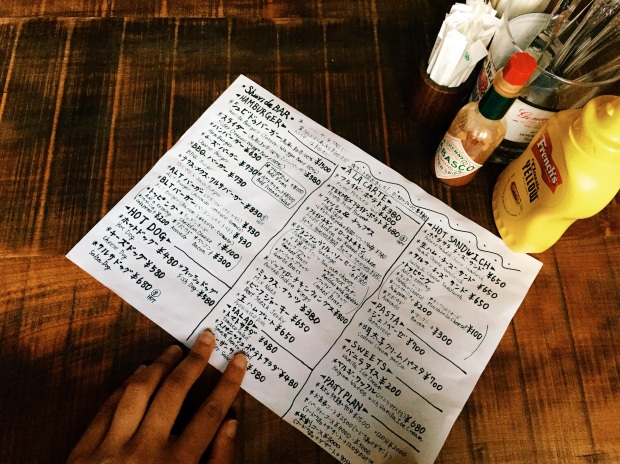 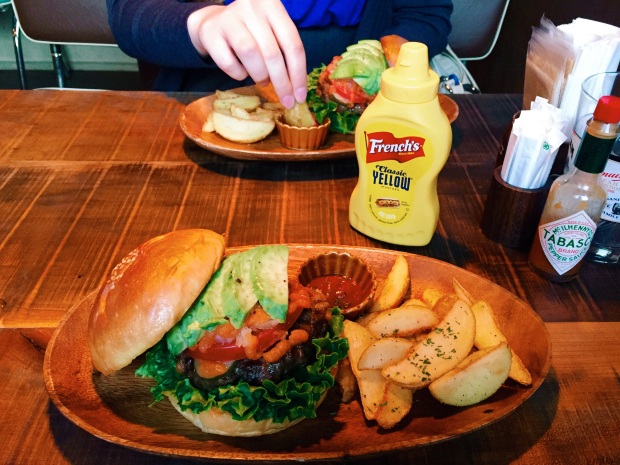 Sorrynotsorry but when I think of Japan my stomach doesn’t instinctually scream burgers and for good reason. It’s almost an oxymoron. They just don’t get it. Like wtf is “hamburg”? A meat patty covered in bolognese sauce served on a plate should not even exist. Okay, it sounds kinda delicious but it actually isn’t. The meat patties are super greasy and gross. Anyways, I have sourced (through Instagram) THE BEST BURGER PLACE EVER. Shuvi Du Bar in Tottori is amazing! Because their burgers are real burgers. As in, proper bun, 100% meat patty, legitimate size and the option of additional fillings including jalapeños, salsa and my favourite, avocado! What’s more, the staff are lovely and most importantly, passionate about what they do – having travelled to America and fallen in love with the American burger scene. You must must go and I must must go back real soon. 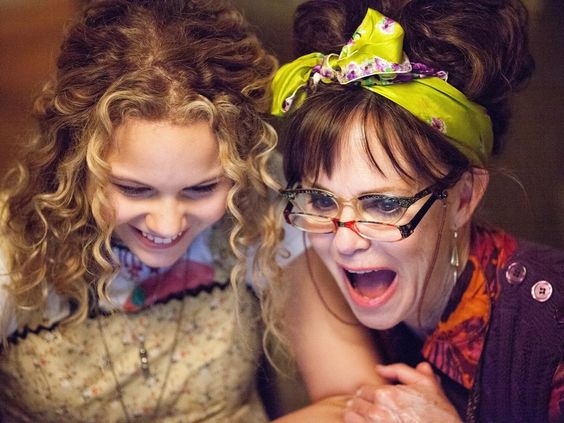 I don’t remember everything from my writing classes at University but I do remember some things and those some things are these: have a likable protagonist, subvert the audiences’ expectations yet at the same time, do give em what they’re expecting. Hello My Name is Doris nails all three. I don’t believe I have watched a more likable lead. Doris (Sally Field) is so charming. And adorable and sweet. So much so that I yearned to lunch with her all movie. What pleasant company she would be! Also, her mother passes away at the beginning of the movie, so, unless we’re stones or cacti or some other dispassionate thing, we can’t help but feel sympathy. And, when we find out she has sacrificed both education and love among other things to take care of her old lady, we feel even more sorry. So, she’s likable and she induces sympathy. Is that how you say it? Can you say it like that? Sorry. English is my second language, you see. Then this delightful little lady starts acting in ways I haven’t seen women her age act in any other movie and just when I almost give up on her and thus life in general (because I’m just that sucked in!) I’m given my happy ending. Feel good, human and quirky. A must must must see.

PS must mean yogurt in Farsi.

I have officially touched back down in Osaka but here are the last of my foodie pictures from NZ.

From top to bottom: hands down the best pizza in Christchurch at Cafe Val, an overdue catch up at the coolest new cafe: Gentle Giant, flavoursome shakshuka from Hello Sunday, local apples, frozen yoghurt (one split into two cos we stingy) and vintage cookbooks on Mother’s Day with my sweet mama at the Riccarton Sunday Market, more coffee (with local almond milk) at Black and White Coffee Cartel and finally, vegetarian black rice sushi (not Japanese) from Bento Riccarton. 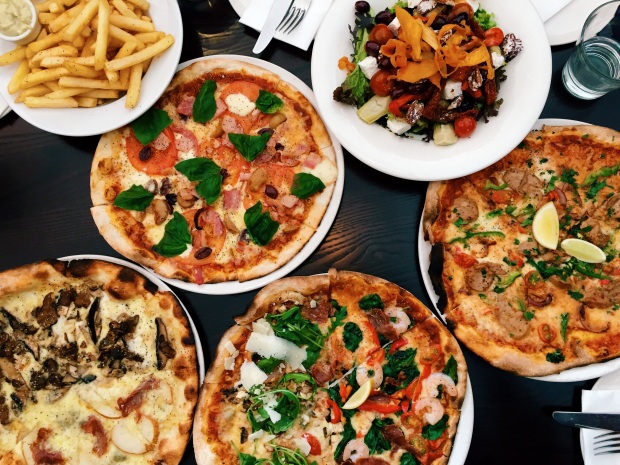 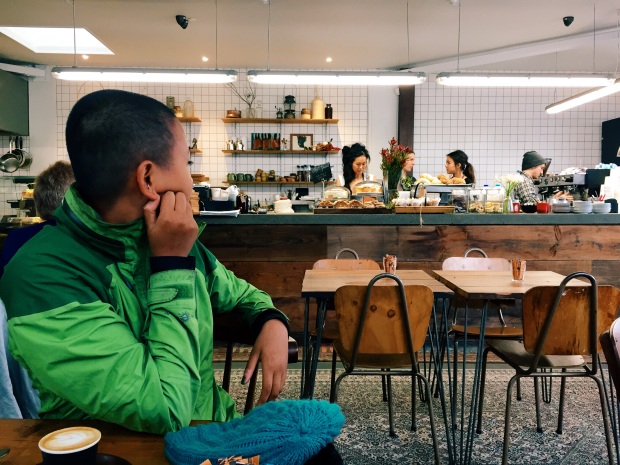 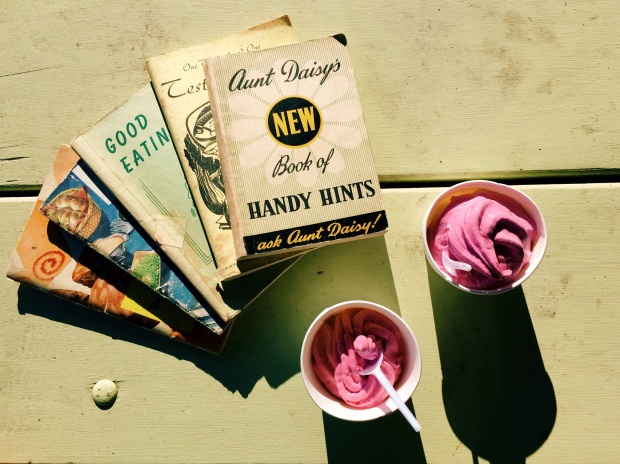 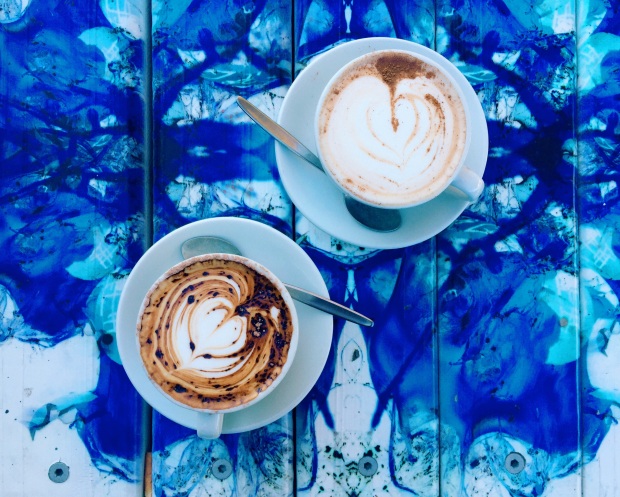 Top to bottom: a nostalgic trip down memory lane; visiting my old University followed by a lunch and coffee date with a crazy Italian at Kadett (an exciting CHCH newbie) and C1 (a CHCH legend) featuring cheeky Marco’s middle finger and ginormous thumb. 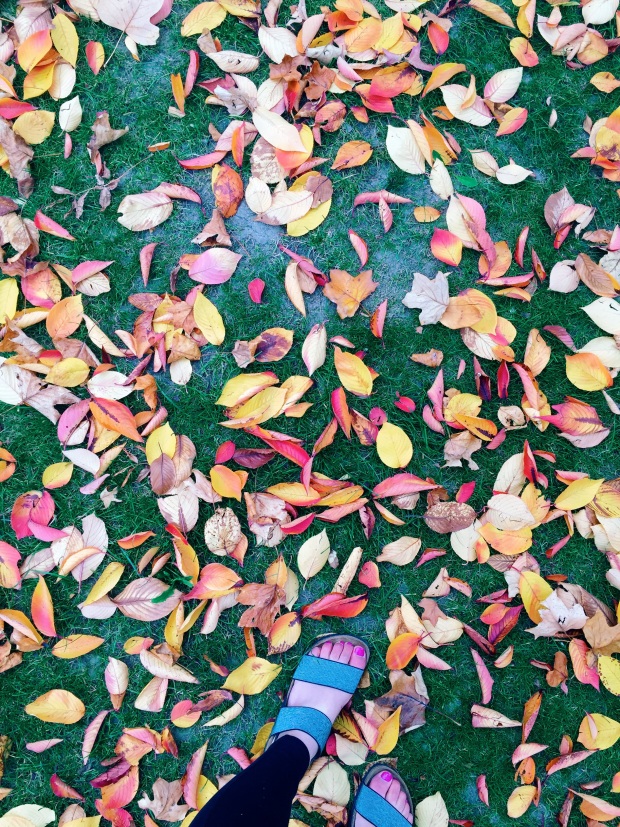 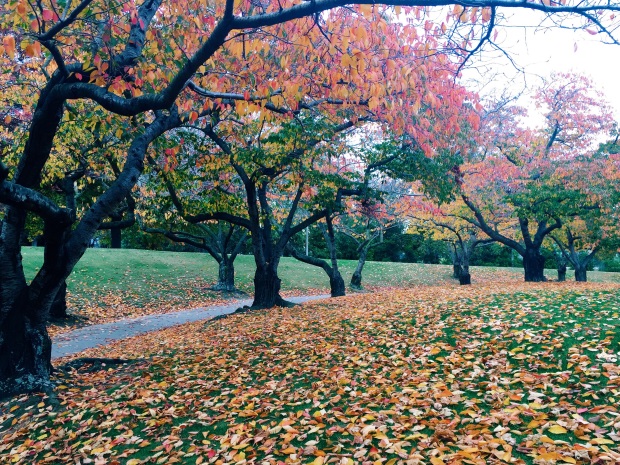 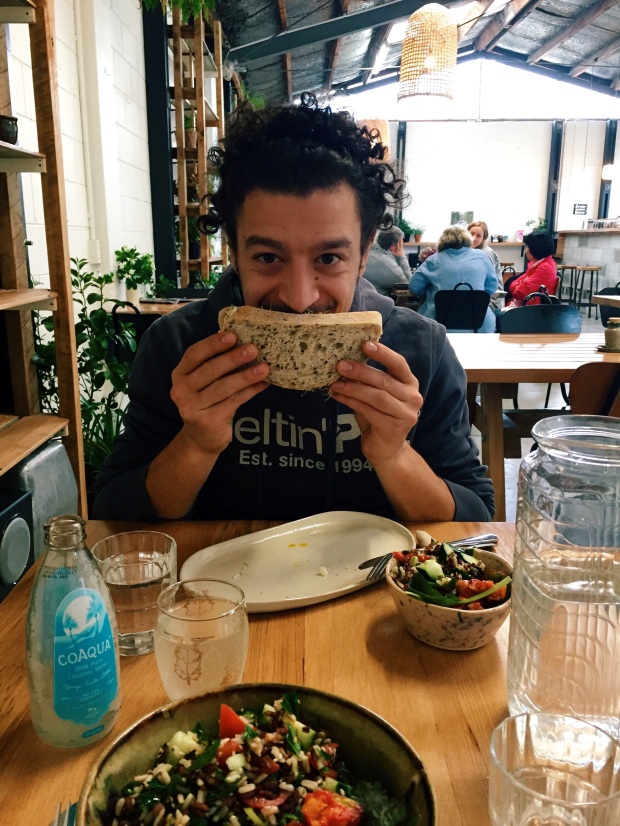 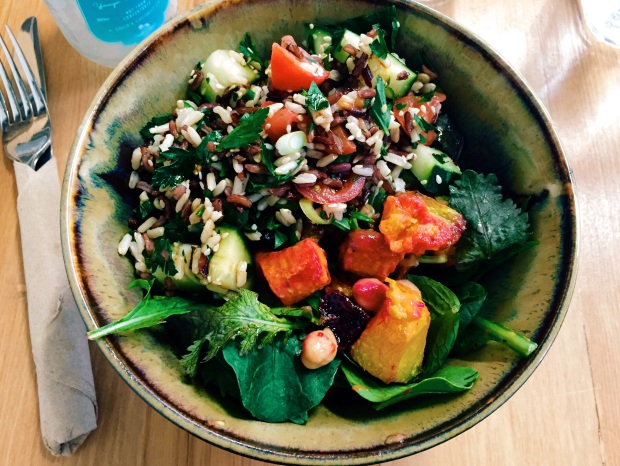 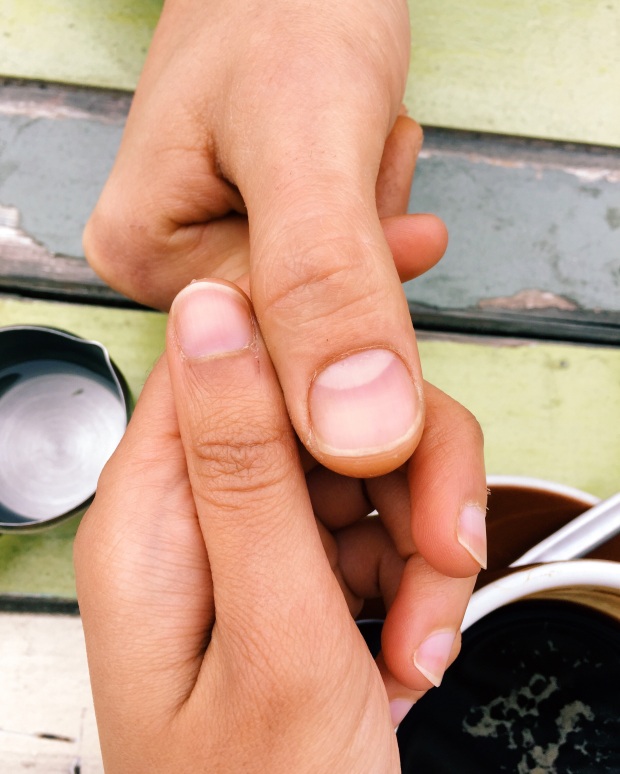 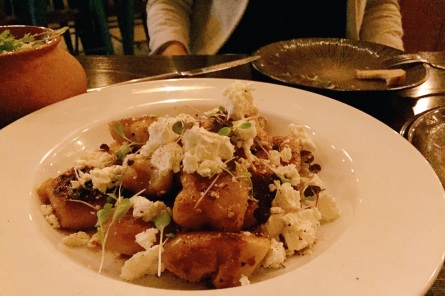 A mish mash of different cuisines, cooking styles and cultures. Where else can you enjoy tartare (apparently originally Polish), gnocchi (Italian) and couscous (North African? Middle Eastern?) in one go? That’s right, no where but Mish Mash of course. Though the food itself is no jumble. In fact, I will go as far as to say, it was one of the best I have ever had the pleasure of eating and trust me, I have almost eaten the entire globe. Foodies, prepare your tastebuds to explode!

The cultural fusion is also reflected throughout Mish Mash’s decor, with its stunning gold world map feature wall. And also, through the variety of mismatched (yet gorgeous) crockery used.

More on the food, tartare (a savoury dish made from raw meat and a raw egg yolk) is the “trust fall” of the culinary world. If its ingredients are not flawless, it can go very very wrong. But done right, oh boy! When it comes to tartare, texture plays a big roll. The slipperiness of raw meat can feel borderline immoral, almost dangerous yet at the same time, SO good. And by good I mean, melt-in-your-mouth, gimme-gimme-more. At Mish Mash, this silky sensation is enhanced by the gooeyness of the broken yolk and the crunch of the crispy kale, which in my opinion, beets (get it?) every other vegetable in chip form. Mish Mash’s tartare is incredible with the best your taste buds have never experienced, found in each mouthful. You must must must order it if you go. And everything else I ordered, because it was all SAH GUD.

Top to bottom: Lunch with my dear friends Ellie and Kate at The Lotus Heart Vegetarian Restaurant. I had an amazing Peace Bowl and oh baby was it peaceful. And, pumpkin, courgette, chard and brown rice-full. Also, nice gift store with good health products too. Next, coffee with my mama at Terra Viva garden cafe (where I used to work). We ordered a chocolate raspberry mousse, a chocolate, coffee and cinnamon cake and two americanos followed by a visit to Raeward Fresh, a top-notch grocery store. Top-notch because of its huge selection of health and organic foods. So good. I wish to live between its plastic-free, fresh fruit, isles. 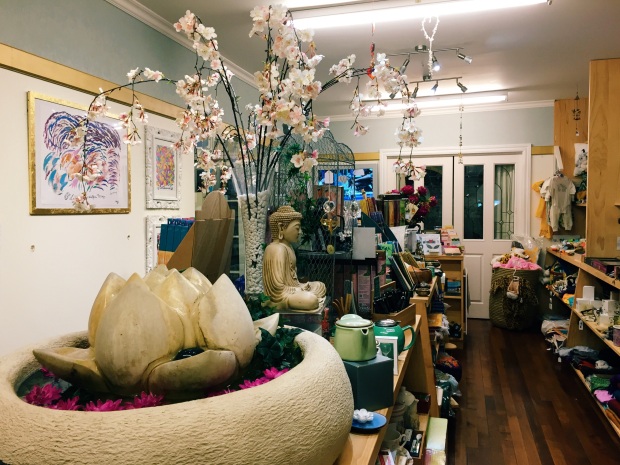 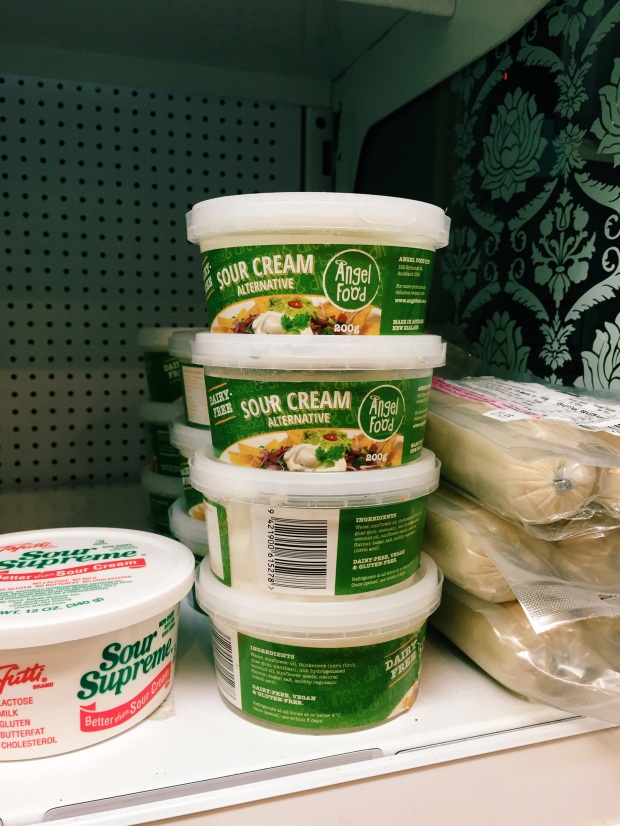 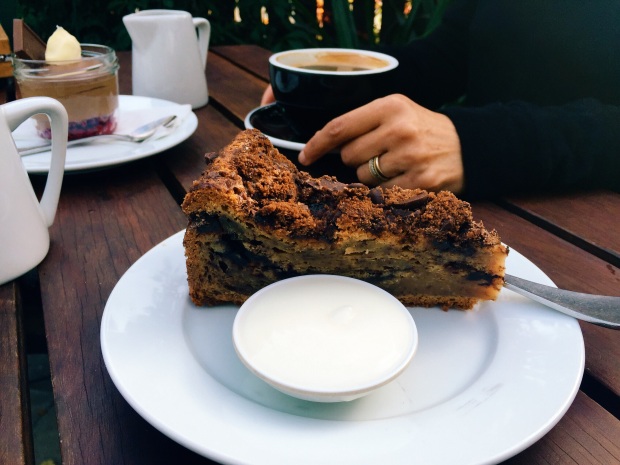 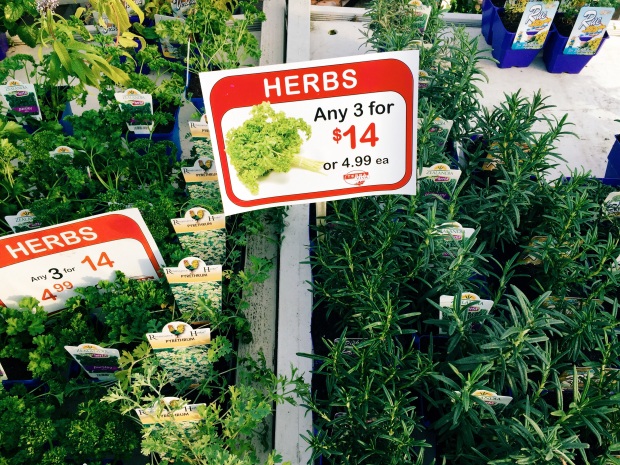 C city. Not sin city. Well, it’s up to you really. Anyway, I had the most wonderful day. Coming home is really something else. I can’t even explain it. Just feel so happy and so blessed. It really is true, you don’t know what you have until you don’t have it. Also, Christchurch is seriously booming after the earthquakes. Which to me, only solidifies that everything happens for a reason. First, breakfast and not just any breakfast but THE BREKKIE OF A LIFETIME at Little Pom’s. Grilled halloumi, sugar snap peas, smashes peas, avocado, broccolini, smoked almonds, poached eggs, multigrain toast, olive oil ($24nzd) which I shared with my mama. I loved this place. How could I not with such floral wallpaper?! Next, a walk around Hagley Park. For all my overseas followers, this is a very gorgeous and very large park right in the middle of our city and is beautiful at every season. Next, a wholesome lunch: roast veggie salad and green smoothie at Pure Cafe. 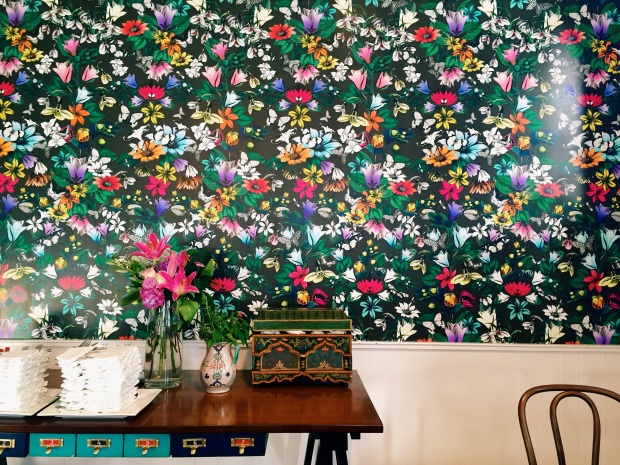 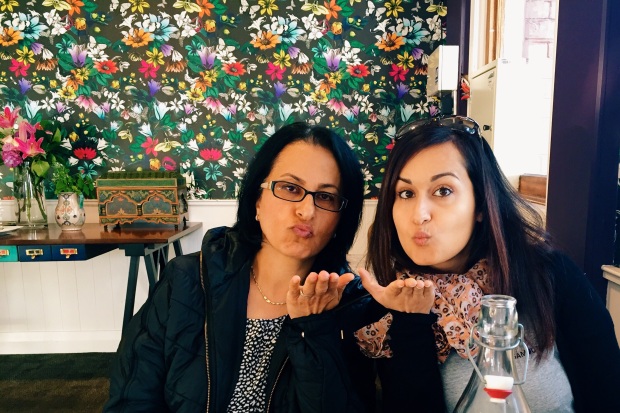 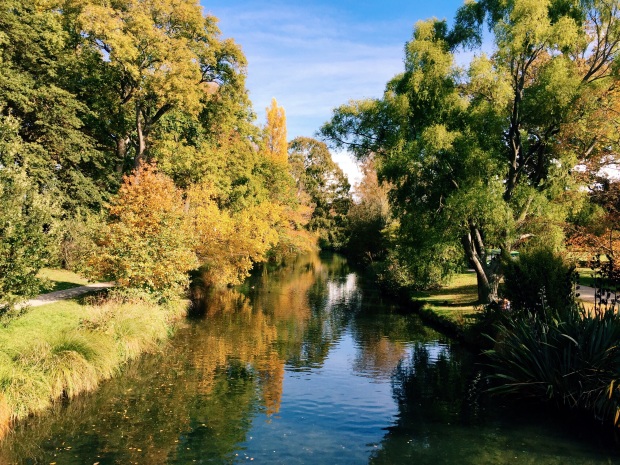 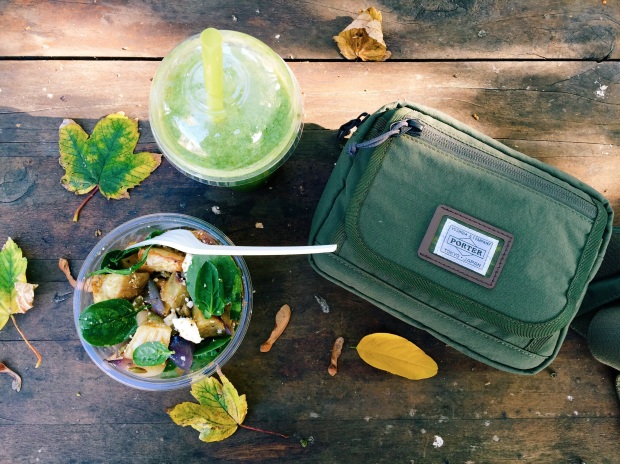 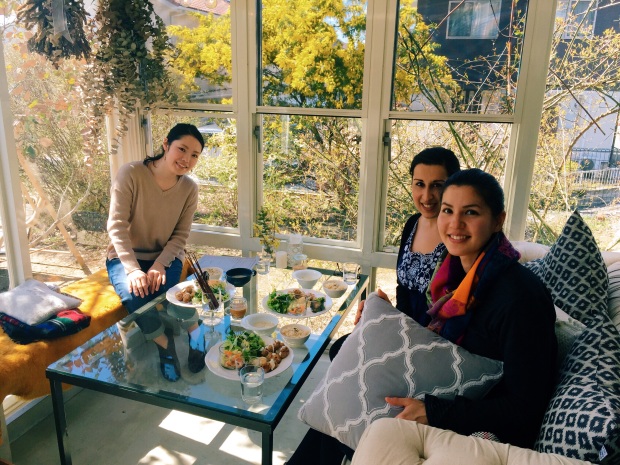 Finding vegan food let alone vegan eateries in Japan is somewhat problematic. Ok, it’s problematic. Not somewhat. Actually, I was once told by a writer friend to not use that word, ever. Sorry. So yeah, it’s difficult to find food without dashi (fish stock) or niku (meat) here. So when my adorable yogi friend, Mi-chan told us about entirely vegetarian Café Bonheur, I got pretty excited.

After having lunch there yesterday, my verdict is, Café Bonheur is a nice place to take your Mother on Mother’s Day (take that as you will). The building itself, its interior and the overall feel of the place is really beautiful and stylish. It is not Japanese whatsoever. I would describe it as an artisan beach-style café. Adorned with sunlight and pot plants, it is much like sitting inside a glasshouse. In one word, elegant.

As for the food, for the price of 1000 yen (about 10 dollars) we ordered the one lunch plate on offer containing a variety of tasty creations including soy “chicken karaage”, tofu “mozzarella”, braised vegetables (2 kinds), garden salad, brown rice and barley soup. For an extra 300 yen ($3 or so dollars) we were able to have a coffee AND a vegan tofu chocolate cake after. Everything was tasty and again, elegant, lush, luxurious. Without stereotyping too much, I know my mother would love it and my father’d have a fit.